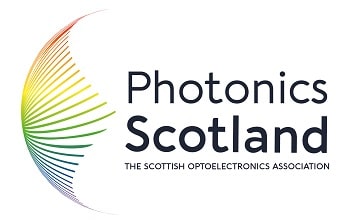 The Scottish Optoelectronics Association (SOA), Scotland’s community for photonics and photonics-enabled organisations, today launched its strategic paper, ‘Photonics in Scotland: A Vision for 2030’, and is also pleased to announce its rebrand to Photonics Scotland.

Photonics in Scotland: A Vision for 2030

The global photonics market is set to grow rapidly over the coming decades, accelerated by unprecedented demand for photonics-enabled technologies across multiple market sectors.

The paper announced today by Derek Mackay MSP, Cabinet Secretary for Finance, Economy and Fair Work in The Scottish Government, sets out a series of recommendations that will secure Scotland’s position on the future international stage, supporting a vision to treble the size of Scotland’s Photonics Sector by 2030.

At the heart of these recommendations is the delivery of a workforce that will meet future demand from the industry, ensuring the essential talent and expertise required for future growth. This includes recommendations to significantly increase the number of undergraduate places in Scotland within relevant subject areas, a new ‘Women in Photonics’ initiative to encourage more women into Photonics careers, and the creation of a Scottish Photonics Academy to upskill and retrain the existing workforce.

The paper also sets out recommendations that will support business growth, cluster development and international promotion.

Mark Western, Technology Sector Team Leader at Scottish Enterprise said, “Scottish Enterprise recognises the high level of ambition shown by the Scottish photonics industry in their new strategy. The sector is among the most innovative and internationalised in Scotland, providing high-value jobs and supporting many other sectors through its cutting-edge technology, such as healthcare, digital communications and energy. We look forward to working alongside the industry to realise their vision.”

The SOA is one of the world’s oldest photonics organisations. Since its formation in 1994, the network has supported photonics companies and academic groups across Scotland, creating an enviable global reputation in the process.

Today, the organisation celebrates its 25th Anniversary at a reception in Glasgow, part of Scottish Photonics Week, a series of events that also includes the European Photonics Industry Consortia (EPIC) AGM being held at the Technology and Innovation Centre at the University of Strathclyde. As well as celebrating its contribution to the sector, the reception is a time to consider the future. Photonics is the critical technology of the 21st century, underpinning modern innovations that will be fundamental to our everyday lives. Against this backdrop, and in consultation with members, the SOA are excited to formally announce the rebrand to Photonics Scotland, a name that better reflects the growing influence Photonics is set to have in the modern world.

The network will continue to support the sector as before, building on the efforts of the SOA over the last quarter of a century, and Photonics Scotland looks forward to working with our members to raise the profile of the sector, help grow this thriving cluster, and drive innovation in photonics in Scotland.

Chris Dorman, Chair of Photonics Scotland, said, “Over the past 25 years, the Scottish Optoelectronics Association has become the focal point of Scotland’s Photonics Sector and a trusted partner to our members. After consultation with our membership and other stakeholders, it became clear that evolving our name was the appropriate move to reflect the sector in 2019 and beyond. The new identity will build upon a history of innovation and expertise, while reflecting the excellent work being done in Scotland.”

Photonics Scotland is a community for all photonic and photonics-enabled organisations in Scotland. We are the focal point for the sector and a trusted partner to our members allowing us to represent their views to a number of key stakeholders. We also facilitate a cohesive sector, providing a range of events, working groups and networking opportunities that help to drive collaboration between industrial and academic partners.

Ultimately, our goals are simple: to help grow this thriving cluster; drive innovation in photonics in Scotland; and raise the profile of the sector both nationally and internationally.

Founded as the Scottish Optoelectronics Association in 1994, Photonics Scotland is one of the oldest national photonics organisations in the world, and remains one of the largest technology communities in Scotland.

Photonics Scotland is a network managed by Technology Scotland, the cluster organisation for Enabling Technologies in Scotland.