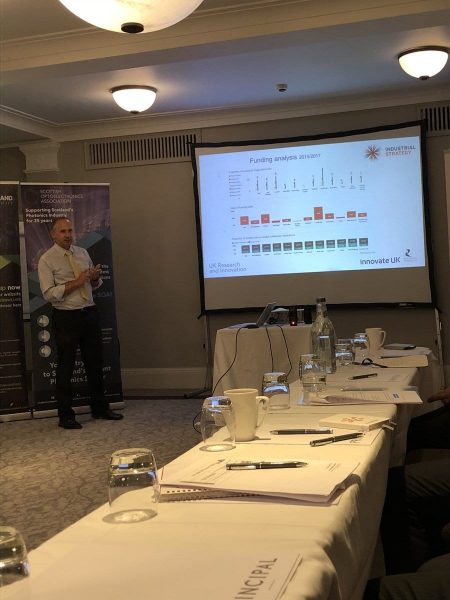 In late August 2018, Technology Scotland had the opportunity to host a roundtable session with Ian Campbell, Executive Chair of Innovate UK. Since its conception in 2015, Technology Scotland has worked closely with Innovate UK and the KTN, bringing funding calls to Scotland, making our members aware of opportunities, and inviting members of the team onto our various Boards.

Despite the event being held at short notice, we were delighted to welcome over 20 Technology Scotland members to the event in Edinburgh, and encouraged by how keen attendees were to engage, discuss their concerns, and share their thoughts. From this valuable discussion, we were able to generate several key outputs which we will progress with our members.

Again, a huge thanks to Innovate UK, particularly Bob Martin and Ian Campbell, for approaching Technology Scotland about hosting this event and giving us the opportunity to get members involved. We very much look forward to working together even more closely over the next few years.

The notes from the discussion are summarised below. For any specific questions, please get in touch with emma.dixon@technologyscotland.scot

Innovate UK’s latest figures revealed that Scottish applications to funding calls were generally low, as was the average value sought per application.

Innovate UK is launching an Accelerated Development Fund with VC’s, which will run complementary to Grants and Loans.

Grants are typically used for risky technology development, whereas Loans are intended for Capital Expenditure (as an example). The Accelerated Development Fund may be used to fund growth.

Technology-based called (for example, Compound Semiconductors, LASERs, etc) will not be re-introduced, or will only run as an exception.

Generally, calls will be based around markets, such as Life Sciences, AI, Data Analytics and more, with the criteria being based around ‘excellence’. In order to be successful, Scotland must ‘self-determine’ clusters.

The group discussed the fact that Catapults are now 5 years old. Seen as intervention strategy, they have a limited lifespan and are seen as routes to commercialisation. If successful, Catapults should, in theory, eliminate the need for Catapults all together.

A new approval process in place will look at lessons learned and how to measure this. The first 6 Catapults are currently going through this process.