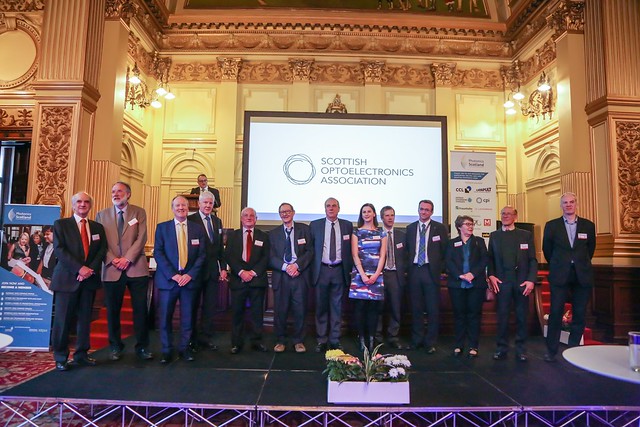 Scottish Photonics Week is officially over! Now that the dust has settled on a very busy week, we’re delighted to have the opportunity to reflect on its main achievements. Over 230 delegates came to Glasgow for the EPIC AGM and Scottish Photonics Week. Outwith the UK, welcomed guests from 26 countries, including the USA, Canada, China, Taiwan, Japan, Germany, France, Spain, Lithuania, the Netherlands…the list goes on! It was a fantastic opportunity to showcase the Scottish Photonics Sector, its long history, expertise and plans for the future.

Following 10+ company visits to members in Glasgow and Edinburgh, we were proud to host the EPIC AGM Civic Reception, followed by the 25th Anniversary of the Scottish Optoelectronics Association (SOA), attracting 200 attendees. The historic Glasgow City Chambers was the perfect venue to kick off the AGM, with speeches from Bailie Kyle Thornton, Derek MacKay MSP, Cabinet Secretary for Finance, Economy and Fair Work in the Scottish Government, and Alastair Wilson, one the founder members of the SOA.

As part of the evening, we also presented our new Scottish Photonics Vision Paper, and officially re-branded the SOA to Photonics Scotland. It was particularly poignant to welcome some of the original founder members to the stage to celebrate this landmark occasion, and thank them for the work put in to establish the SOA. The EPIC AGM kicked off on Thursday, where, following EPIC’s traditional morning run, our local and international visitors had the opportunity to hear from our fantastic keynote speakers, network, form potential collaborations and join us for a networking dinner at the Grand Central Hotel.

The AGM continued into Friday, beginning with sponsor workshops from CST Global, CSA Catapult, UK CPI, CLL, Fraunhofer and Leonardo, continuing with local keynote speakers including Neil Martin of CST Global and Dr. Graeme Malcolm OBE of M2 Lasers, and culminating with the announcement of Vilinus, Lithuania, as the 2020 EPIC AGM host.

Finally, we were delighted to host the IOA AGM, with 15 attendees from the UK, Germany, USA, Taiwan, China and more. We are keen to progress further collaboration between international photonics clusters and look forward to meeting again soon!